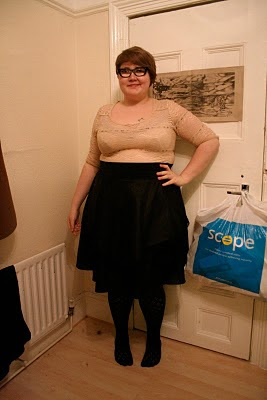 This post is sponsored by a roaring hangover that is slowing turning into a flu type bug as we speak. Today involved lots of sleeping, reheated macaroni cheese and avoiding the outside world. Last night I went over to a friend's house, and we cooked butternut squash and goats cheese lasagne, then I made these awesome brownies (with white chocolate chips and a peanut butter swirl) for puds: 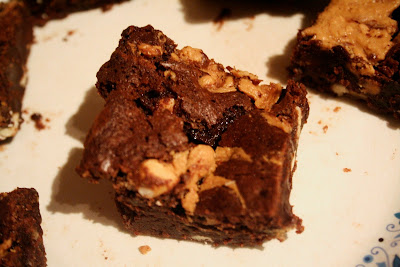 Mmmm, chocolate hangover. And most types of hangover actually.

This lace body was a score from the very sale, back when I had pennies. It's not seen much outing as yet because I want to wear it with just a bra, and the only beige one I have is a bit "oh hello have you met my breasts?", so instead I teamed it with a beige cami instead. 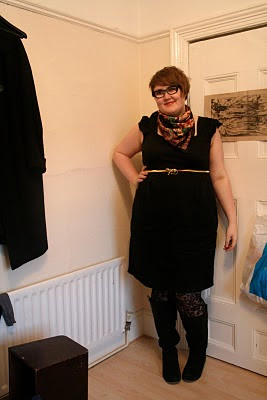 It was my work Christmas lunch today!

Today I remixed a dress I posted about here in September. Second hand December has been great in making me realise what I actually have in my wardrobe and dress it up more, instead of hitting sales (I don't think I've even been in a high street shop this month!) or ebay lurking more than is healthy. This really was such a bargain, and also works great as a day to evening dress - it's got a little more sex appeal than most of my work wear. 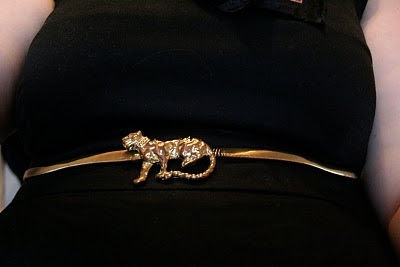 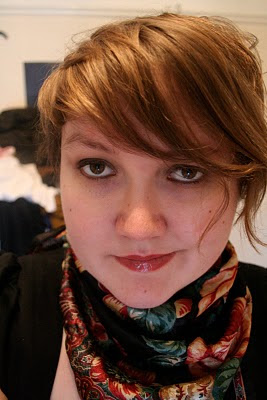 And look! Make up beyond a smidge of eyeliner. Created with a brown eye pencil, a primark eyeshadow palette in browns and black eyeliner after.

Annnnnnd to make the day even better, look what I found for £5 in a new vintage shop on Sydney Street, Brighton, today! 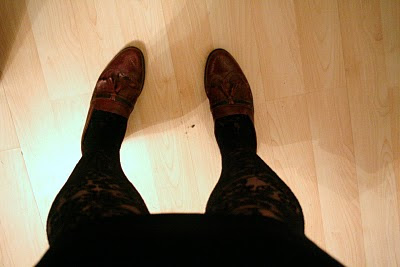 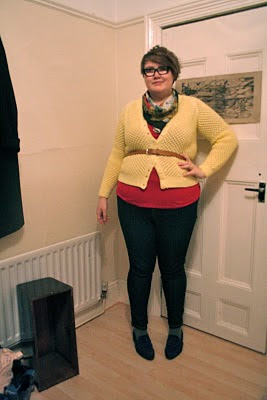 Thrifting to sell is a bit of a bad plan sometimes. I found this yellow bobbled hand knitted cardigan in a charity shop this weekend, and thought I might try and sell it on to pay off some Christmas debt, but it fits a little too comfortably right now. Oh dear.
Cardigan, £1.99 charity shop
Red top, £free, clothes swap
Scarf, old stock £free
Jeggings, £7 New Look
Loafers, £17 vintage store
Posted by K at 12:04 3 comments:

Self Love and Fat Acceptance 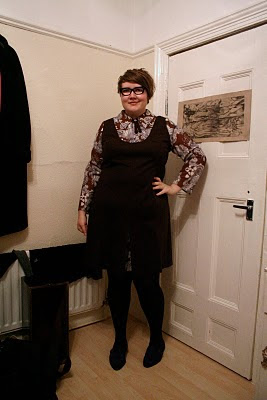 So this past week has been a week of repeats, a few mistakes and lots of lazy choices. Today was the first day I wore anything presentable in a good while. This dress is a 60s heavy polyester, the fabric I know most loath but I seriously love in the winter with some thermals!

Also, I'm doing pretty good on my buy secondhand front this month! So far, all I've spent is £1.50 (I did forego a fabulous batwing jumper dress on in a Scope this weekend to buy a Michelle Tea book and some zines, a decision I am now certain was the right one!)
Posted by K at 20:17 1 comment: Some serious bargain trashy joy to be had here. This lame jacket/shirt/top of awesome is just $13, with free US shipping and a bust of up to 52". AMAZING.
Here
Posted by K at 14:42 1 comment: Oh looooordy. Just found this little beaut on etsy. Sadly out of my budget at $28 and more sadly on the small size for me, but one to note for anyone with a 44" bust or smaller. Is that suede panelling? Serious business.
Buy here.
Posted by K at 14:16 No comments:

Okay, so I'm operating on not too much sleep and a bit too much cherry yoghurt, but I wanted to get some thoughts down here on being a fatty and a thrifter. I just spoke with Charlotte Cooper for her super amazing phd research, and, when I was talking about my background I realised exactly why scavanging and thrifting form such a huge part of my identity.

I grew up in a pretty poor household, as previously discussed, and when I was younger we never really had the money to shop in "proper" shops. This used to irk me constantly, as where I grew up (bar the estates in the town) was generally an affluent town. This meant that the kids that I went to school with never really seemed to want for anything, and always got given money to shop with (I had a ever dwindling paper round that paid me about £10 a month).

At the weekends, my dad Steve and I used to go around all the charity shops in town. There are about 8 within a fifteen minute bus ride. We'd get a day ticket on the bus, and travel between all the hot spots for second hand shops, and then also sometimes big markets with budget clothes resale stalls. Also, on bank holidays there used to be an awesome car boot sale in a Waitrose car park (it shut because it "degraded" the area! Oh Surrey, how I don't miss you). These were the only resources I had available to me, and so I would spend hours in them. Whenever we went to a new area, we'd hunt out new shops, and start rummaging.

Mostly it'd be full of mediocre things (they still are), but sometimes you'd find a gem at the bottom of a 50p bin. I wish I had my family photos with me now to show you some of the horrible things I acquired and treasured - a zig zag patterned fleece jacket, neon green trainers, orange dungarees. Everyone at school thought I was a weirdo (I guess I was one), but finding these obscure unusual items gave me a way to escape from my background. I could be anyone I wanted, as long as I could fashion a "costume" from a 20p bin. It was a challenge that started my obsession with clothes, and which spurred what later became my body positivism. I think this is why I find it hard to write a guide to thrifting (which a few people have suggested I post) - because largely what I find, I've found through being incredibly stubborn and willing to root through bargain bin after bargain bin, and to hunt even after hours of disappointments - because realistically that's all I could do given those circumstances.

There are other things I found as well, books, for instance. I remember my library used to sell off their old books in a 50p a carrier bag sale (whatever you could fit in all came to 50p!). They did the same with VHS, which is how I discovered world cinema as a slightly precocious 16 year old (well, that and going up to the Prince Charles Cinema in London for £1.50 matinees, which I could travel to for free as my dad works on South West Trains). I found a copy of Shadow on a Tightrope for 99p in a charity shop, for instance, and later Fat Is a Feminist Issue. I found Blondie and David Bowie LPs, and fashioned myself as a second hand glam kid ultimately (after a bad period spent in goth-land). Later my scavanging became online scavanging - hopping from place to place, forums, blogs, communities and profiles to scour for new friends and resources. My feminism, my fat activism, my friends, my boyfriends, my band, my heroes and my support network grew out of being an internet nerd, and through this online scavanging as an extension to my physical scavanging.

This evolved into vintage shopping, ebay hunting, clothes swapping, bookmooch and online trading. Most everything I own comes from an obscure source - a flea market on holiday, a vintage store in a tiny nook of London, a charity shop I visited when seeing an online friend in real life, and so on. Every item comes with a story, and can be shaped into a new story. In turn I pursued a career in archiving because of these stories, and because of these amazing objects that connect to so many different histories and people. I guess thrifting for me is a way to create spaces, people, stories and identities that I never really had access to - and in doing so to deconstruct them perhaps. This is why I love clothes, and why I'm constantly changing/trading/swapping mine - because in doing so, I can play with a new self, and I can connect with so many different people.

I guess I love that through thrifting or scavanging, in any format, you can find yourself in a million other people's possessions, stories and blogs/communities, and also you can find the space to create a new self or identity through the remnants of others.

And on the note of clothes, here's a quote by Iris Marion Young, in her essay 'Women Recovering Our Clothes', that makes me think about how innovative and revolutionary this sort of fashion play can be:
"One of the privileges of femininity in rationalised instrumental culture is an aesthetic freedom, the freedom to play with shape and colour on the body, to don various styles and looks, and through them exhibit and imagine unreal possibilities. Women often actively indulge in such theatrical imagining... Such female imagination has liberating possibilities because it subverts, unsettles the order of respectable, functional rationality in a world where that rationality supports domination. The unreal that wells up through imagination always creates the space for a negation of what is, and thus the possibility of alternatives."
from On Female Body Experience; "Throwing Like a Girl" and Other Essays.

This to me, is what is so exciting about a life spent scavanging. Kx
Posted by K at 19:51 3 comments: 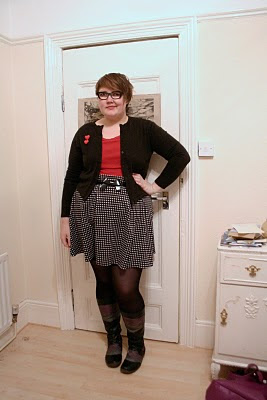 It's too colddd, so here's last Friday's outfit for you. I'm not sure when I'll change out of jeans and jumpers, it's way too wintery for anything else right now. Oh dear.
Rundown:
Cardigan, £free, clothes swap
Top, £free, clothes swap
Heart badges, traded online at ThriftstoreUK
Skirt, £15 Very sale
Boots, Deichmann £25
Posted by K at 11:41 1 comment:

Rargh, sorry for the lack of posts this week. As all other UK types will know, there's been snow mania this week. Quite frankly, this and chronic insomnia, as well as about 9 hours spent travelling on what should have been a 4.5 hour journey to Leeds last weekend to see my boyfriend, has meant outfits have not really been on my mind! 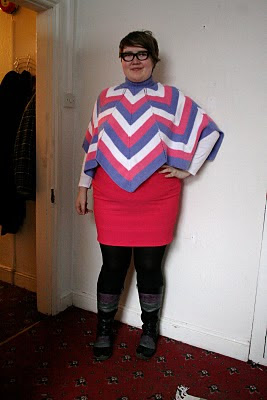 Here's one very bright winter outfit for you. I bought this hand knitted poncho at Otley car boot sale over the summer for 50p! It's quite simply the most garish and wonderful thing in the world and I wish I wore it more.

Otherwise this weekend I avoided ever having to leave my boyfriend's flat. Basically, we cooked and played scrabble for a very long time. It was the restful weekend I've needed in a long time. Here's some food for you: 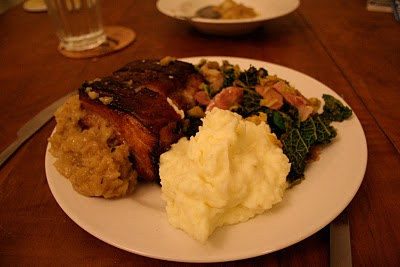 Pork belly with honey crackling, sprouts and cabbage cooked in bacon and butter and the creamiest mash ever. Oh, and home made bramley apple sauce! Mmmmm... 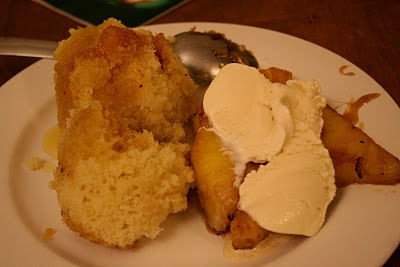 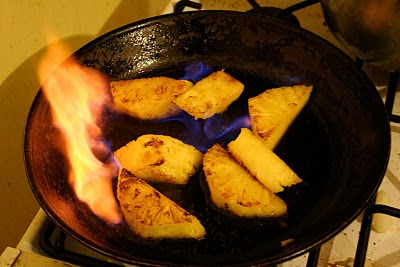 Syrup sponge pudding with rum flambeed pineapple, caramel sauce and vanilla ice cream. I can't even describe how weak at the knees this picture is making me, ha. Mmmmmm, flambe. 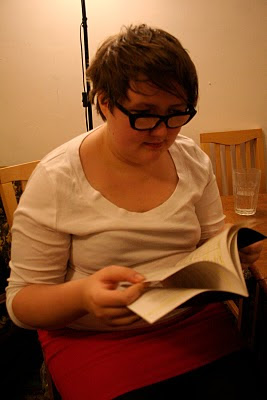 And this is how serious I look when reading Scrabble rules. Mmmm, scrabble.

Also, I am getting seriously overexcited thinking about the UK blogger meet that Lauren from Pocket Rocket is organising! Find out about it here. I'll definitely be there in my most garish ensemble and my most awkward social manners xx
Posted by K at 19:42 16 comments: