Hey world, not sure anyone reads this now and it feels a little bit like jumping into a time capsule. I said goodbye, but I'm back with a plug for a new project which might interest fat crafters out there. 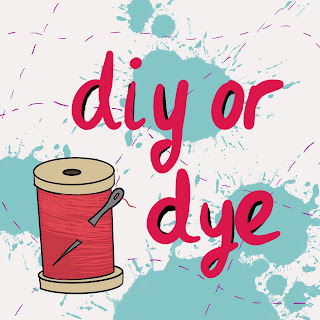 DIY or Dye is a new online fabric shop and haberdashery. I set the shop up to cater for fat folks, queers, weirdos and anyone else who finds mainstream craft too normy and twee. I launched last week, and you'll find a special selection of fabrics, patterns and books for fat bodies available (and many more to come. Hope to see you over there <3 nbsp="" p="">
You can also find here on twitter and instagram!
Posted by K at 13:55 19 comments: 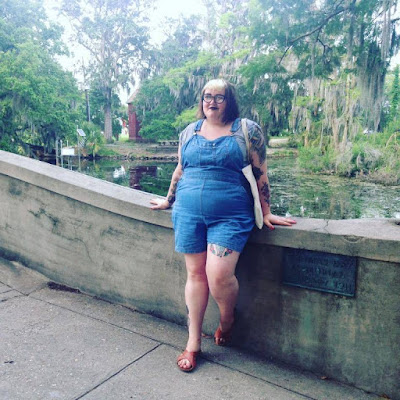 Hi! This blog kind of petered away over the years and I never really posted to say goodbye. I’m not blogging anymore, partly because I have a busy life and partly because I feel really uncomfortable with what happened to fatshion in the last 4-5 years. I wanted to leave a final post to say goodbye (and thank you), and also process these thoughts.


I liked this blog a lot when I posted here, I met friends that I still care deeply for and it was probably the first place that anyone told me that what I had to say was important and valuable. The support I got here helped me to feel confident enough to start writing zines, making music and producing countercultural *stuff* that makes me feel alive and full of energy and excitement. The words and pictures I put here were the first I’d expressed publicly in a long time, and that was a significant thing for me given where I come from and particularly how hard it is to write as a working class woman.


I started this blog because I read other blogs and I was annoyed at how much fatshion was centred around purchasing capacity and buy-in culture. I was on the dole and I had *nothing*, and I came from a working class background. I still liked clothes and I thought other people like me existed, so I started a blog. I still like clothes but I’m not as poor most of the time now.


I participated in fatshion communities for years before I started posting here. The livejournal Fatshionista community was the first fat positive culture I found. One of the things I liked about that space was the visibility of queer femmes, working class women and women of colour, which (with a few notable exceptions, you know who you are) are not the bloggers that have been picked up out of these spaces (I wonder why). I liked the bad outfits too, the rainbow socks and tutus and the age inappropriate clothing that got chewed out on Unfatshionista (the secret snark community). I liked seeing everyone, shoddy mirror pics and all, gleefully existing, wearing stuff and not giving a shit.


Signatures of success for bloggers have become the ability to assimilate within brand culture - having clothing lines, working for them, being sponsored by them, and acting as ambassadors for them. I can count on one hand the amount of bloggers I’ve seen show signs of having any sense of radical politics now. Brands adopt “body positivity” to sell stuff (sometimes even stuff to change your body). People have stopped reading blogs because they’re full of the same rhetoric as the brands we sat criticising on livejournal all those years ago.


Fatshion culture now still exists around a dichotomy of good vs bad fashion that makes me feel uncomfortable. There’s a lot of talking about breaking fashion rules, and maybe people are breaking the most obvious rules, but you’re still posting with your hands on your hips and your legs pressed together and in poses that hide your fattest parts. When I followed bloggers on twitter I regularly saw bitching about outfits that weren’t “good enough” – as if people who weren’t professionally photographed in flawless make up and on trend everything didn’t have the right to claim access to this space. Other people are regularly accused of being "too radical" or too hard on brands. This good/bad dichotomy and apolitical attitude about clothes is exactly why I needed to access fatshion spaces in the *first place*, and I resent it existing in them now.


When I posted here, people bitched about me on forums because I’m not pretty or conventionally attractive for a fat woman. Sometimes people zoomed in on my face and commented on the fact that I didn’t have perfect make up, or that I showed signs of sweating (oh my god). I was expected to be pristine in a way that I’m not, most days, and that’s okay. It’s okay to post pictures of yourself on a public platform without being “perfect”. It’s okay to celebrate your fashion choices when people call you ugly constantly. It’s okay to wear a bad outfit.


So basically hi, I’m still here, existing, wearing ridiculous stuff that I shouldn’t. Thank you for being here and supporting me, when I posted here all the time. I am archiving this blog (and encourage anyone to do this same) on the British Library’s Web Archive.


Here are some places you can find stuff I do and my writing now:
Twitter
Fat Positive London (through which I've been running fat positive clothes swaps in London)
Etsy (for zines)
Facebook (also for zines and general updates) 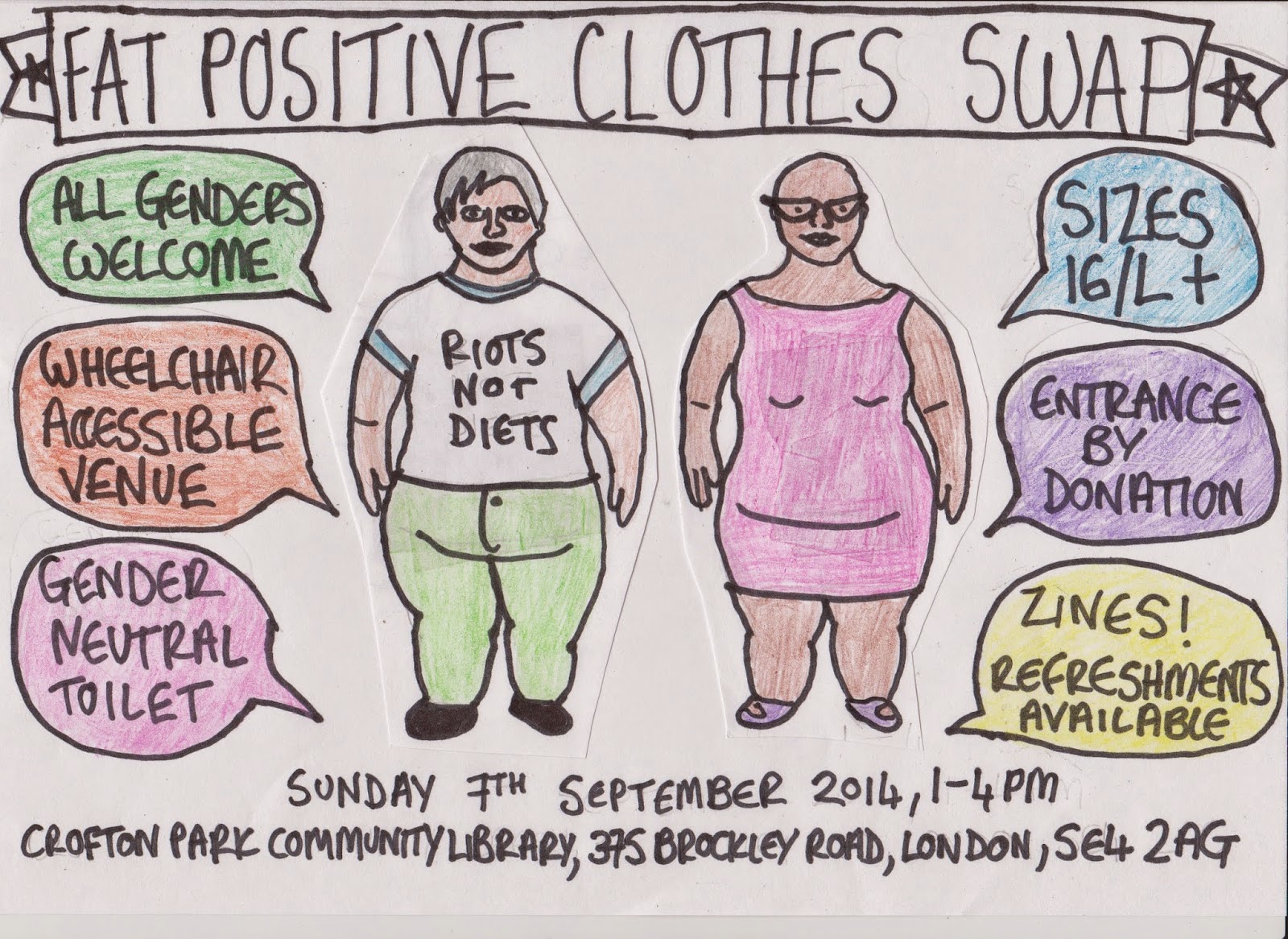 Hiya folks, long time no see! Just a quick post to let you know that I'm going to be hosting a fat positive clothes swap on 7th September in London. There'll be clothes and zines and cake and lots of opportunities to meet other rad fat people. The one in February was fantastic so would love to see more of my readers at this one.

RSVP via facebook here and you can make donations in advance here (if you can do this, please do as we're paying to hire a venue this time!). If you have any questions feel free to get in touch. 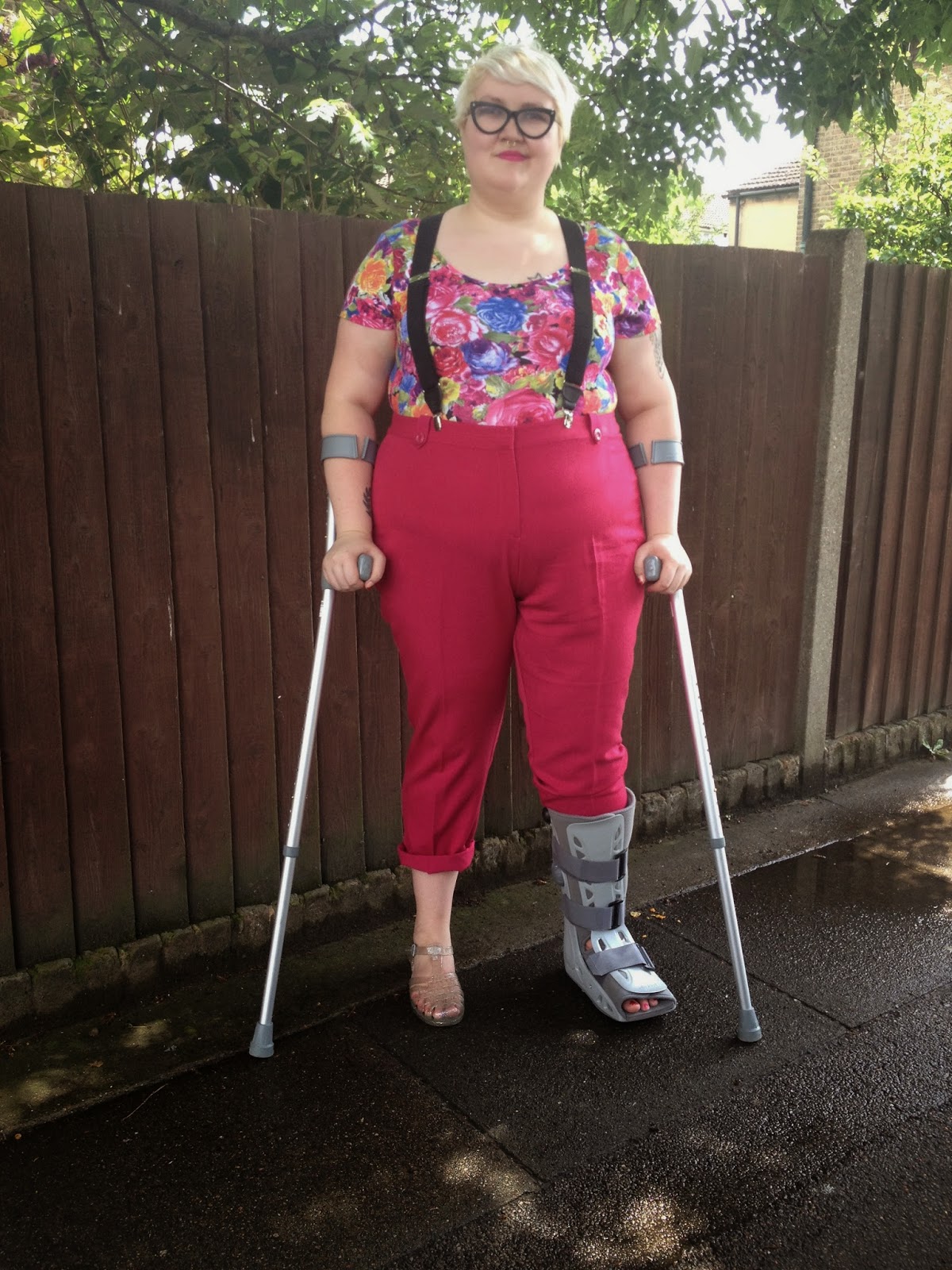 More broken leg fashions hurray. The trousers are on mega sale at Simply Be here and come mega recommended, they're super comfortable, slim, stretchy and high waisted. The top is a body/leotard and also new from Forever 21 here - it's *so* excellent I'm wearing it with most things.

P.S obnoxious colour combinations are kinda fun, aren't they? I also like the femme butchness I have going on here. 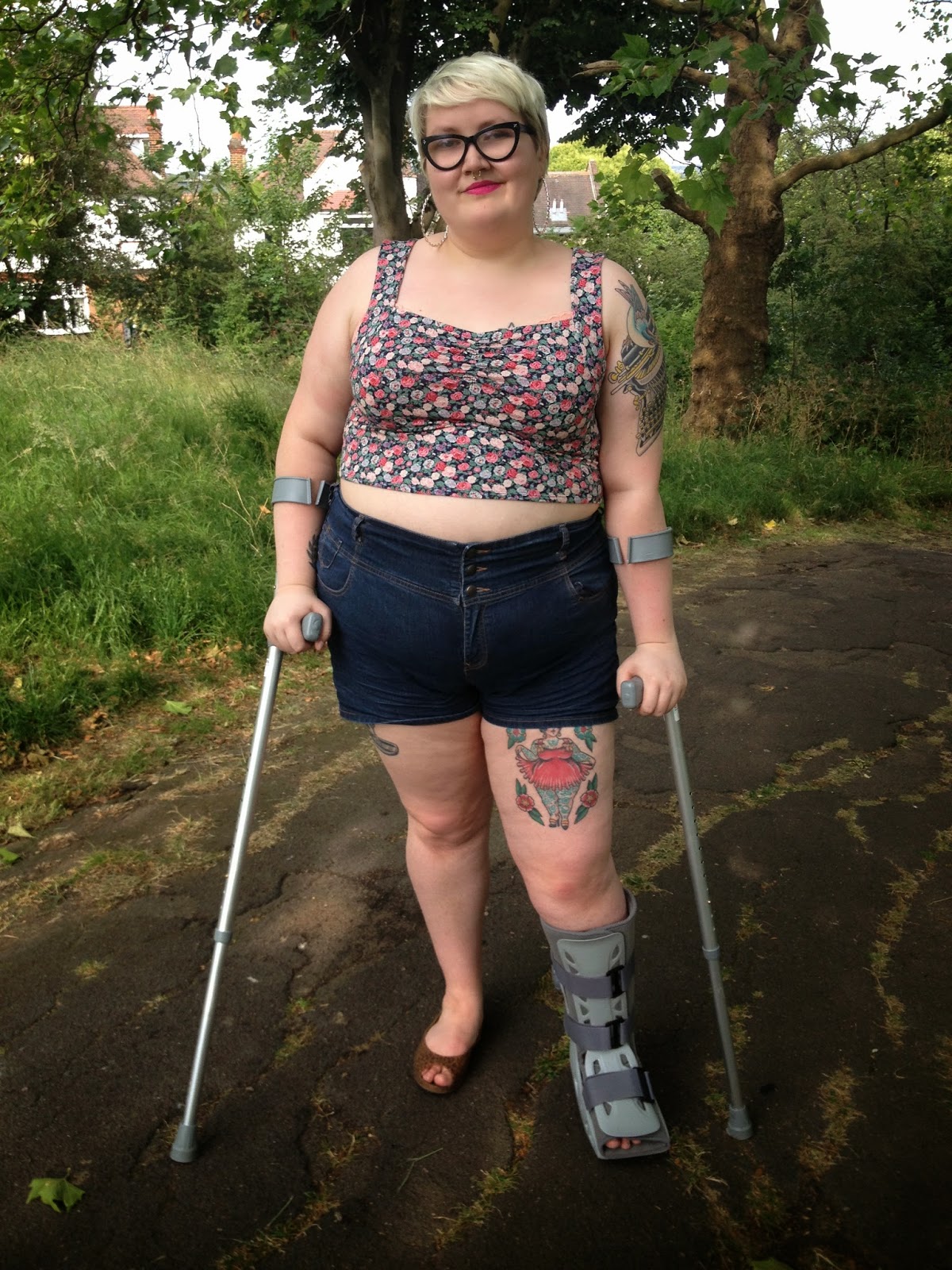 So my latest accessory is a robot boot and some crutches.... which I gained after breaking my ankle in May. *Thankfully* I'm almost mended up now. I wore this to go for a little walk in my local park today. It's pretty simple, but also my summer uniform and what makes me feel the best. The shorts are on their way out so I'd welcome recommendations for other high waisted fat sized shorts?

Why health is not a useful discussion

Today on twitter I said something about fat (about how I hate the fact that getting fat is seen as worse than ANYTHING even really awful stuff). I was thinking about this because I was remembering how someone on the same ward as me in hospital (when I was having/recovering from ankle surgery recently) seemed to be more scared of getting fat than the implications of her (really bad) knee injury.
I got trolled, and I replied and got drawn into something which I shouldn't have really, but I get fed up of not responding and thus being silent/feeling oppressed.

I called them out and every time they would state another assumption whilst saying they weren't talking about me personally, but fat people as a whole. I told them what they were saying was wrong, classist, fat shaming and health shaming (tip of the iceberg), and to be honest I think I'd rather they had criticised *me* personally rather than making massive generalisations about all fat people, as if that was somewhat better.

I am fed up of fat meaning EVERYTHING else - it took 8 minutes for someone to bring up McDonalds in reference to a tweet about nothing related. Just now I logged in again and found that someone else has tweeted me offering exercise "advice" and telling me that it is possible to eat well for less. A few dieting accounts have followed me too. It's impossible to talk about fat without it being conflated with health, or morbidity, or gluttony, or a million other things.
I can deal with this and I'm not upset personally - I'm used to dealing with this every day, but I thought this would be a good time to talk about it. Most people would've brought up HAES, but I didn't, because I'm a fat adult who was a fat kid raised by fat(sometimes) parents who fed me McDonalds - and I'm okay and don't resent this at all. I live a sedentary life and I'm not healthy. I don't care! So are a lot of thin people! I also don't think anyone has an obligation to be healthy. I think there are more complicating factors around being healthy i.e. time, money and resources that are needed to exercise and that not all people have access to. Hey, if you can eat healthily and exercise on a budget, I'm happy for you, honest, but this doesn't mean everyone can or even should be obliged to.
I also think that using health as a get out clause ignores the wider problem of fat shaming, that it's not fair to only defend those who are fit, healthy, otherwise socially acceptable fat people. Making excuses that justify our right to be fat is adhering to a social agenda that insists that being fat is inherently inferior. Here's another example: on that telly programme a lot of you saw me on, I was repeatedly asked about what I ate that day, how much I exercised, what I ordered when I ate out. I refused to give "good" answers (or "bad" answers), but the necessity for me to tell them this was there. I'm sure none of the other participants faced that sort of questioning.

I don't care if you're fat because it's genetic, because you're lazy or unhealthy, if you can't exercise or afford to eat well, I don't care if you're slightly fat, or if you're super fat, if we can't support each other in different lifestyles, then fat acceptance isn't acceptance at all. So you won't catch me talking about health when I talk about the right to be fat, to live fat and to exist without being shamed.
Posted by K at 21:55 56 comments: 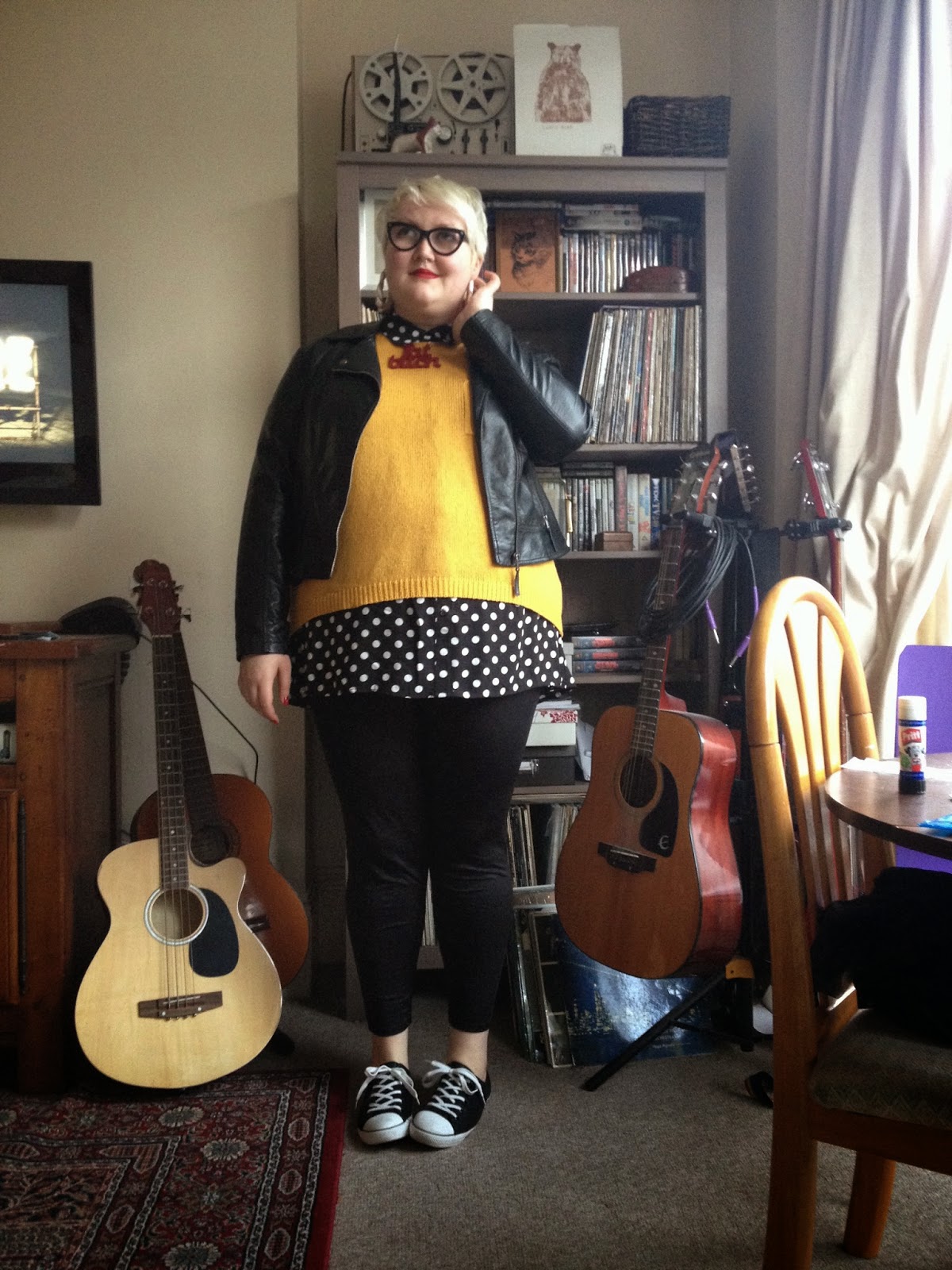 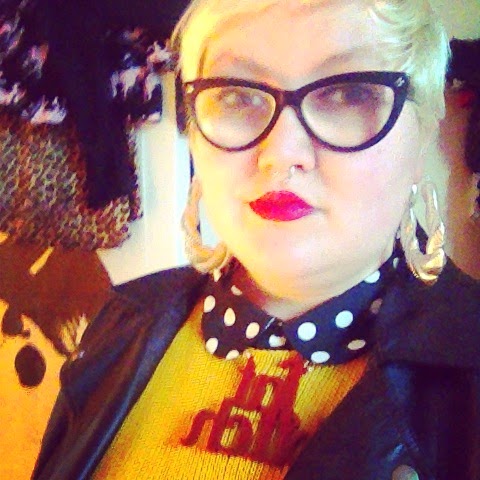 A couple of quick outfits from the last few weeks! 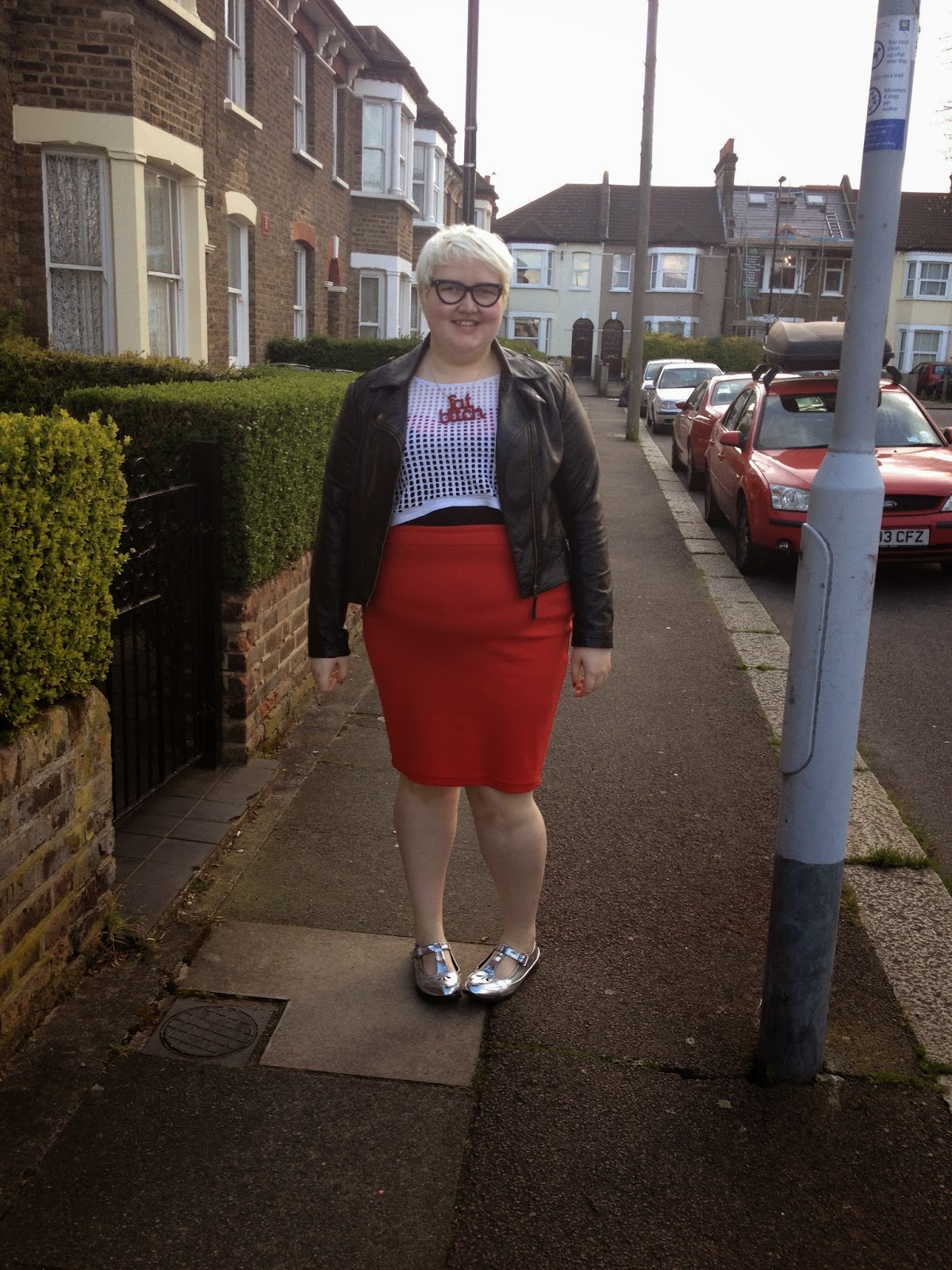