Some thoughts on clothes swaps 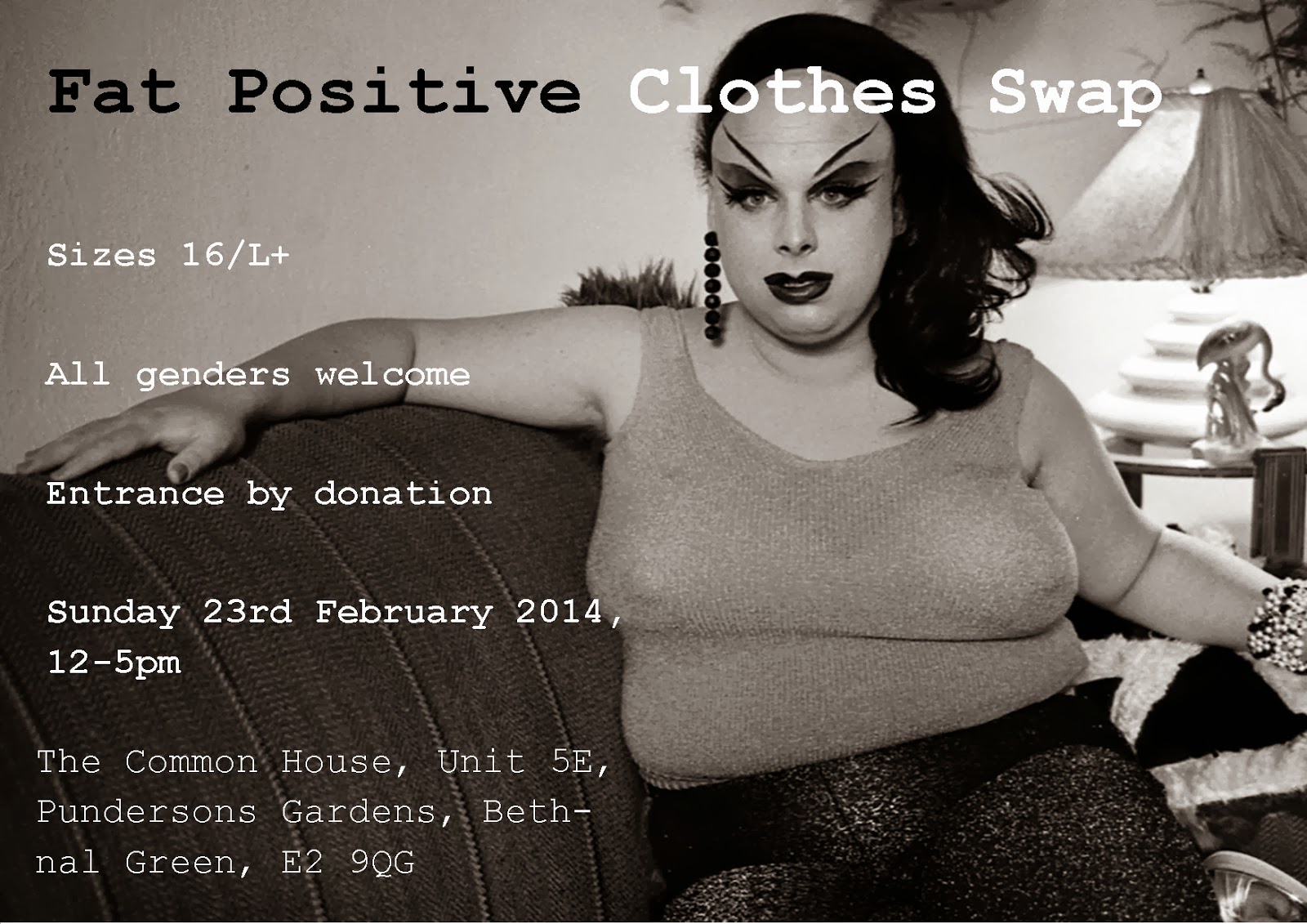 Here's a thing I'm organising in a few weeks time! This is my first time doing any solo organising in London, so any support is appreciated. There's an event on facebook here which you can RSVP to for further details, if you have any questions, and to keep me up to date with the numbers I'm expecting. As well as clothes, I'm hoping there'll be zines, tea and cake.

If you're not in London, the ace Yorkshire Rad Fat Collective are co-ordinating a swap in Sheffield and Leeds.

I've been involved in organising clothes swaps for a while now, and today I was thinking about them as tools of resistance themselves. It's really hard to divorce fashion from capitalism, and I think fatshion faces a lot of (often fair) critique because of its dependency upon brands and lack of skepticism about consumerism. I've found myself drifting away from fatshion communities over the last year because of this, because I'm not interested in fashion as an industry, and often the divide between blogger and brand isn't there in the way it has been. It doesn't appeal to me as much anymore, because I can't buy buy buy all the time, and also because I want blogs to be *different* from mainstream fashion chat, and brand websites.

Passing clothes among each other is something that happened in my communities growing up - people didn't have much, and to make do we would help each other out. This wasn't really something I had much access to in my family, because there was just two of us, and my friends were all thinner than me at the time. BUT I saw how passing stuff on helped people - when you needed a white shirt for a job interview, someone could help you out. When I was unemployed, the swaps in Leeds helped me in a similar way - they gave me access to new clothes, both practical and frivolous, even though I couldn't otherwise afford them. It's for this reason that I always encourage people to come to swaps even if they don't have much to swap themselves.

There's another dimension to fat swaps too, for me, that comes with clothes that don't fit you anymore. I *still* hoard clothes sometimes, even though mainly I have enough now. I was pretty poor growing up and used to diving for things that might fit me when I saw them - whether I liked them or not didn't really matter. It's an instinct I still have. I've kept badly fitting clothes for the same reason, for *just in case* purposes. Being able to see other people look amazing in stuff that doesn't fit me anymore, or never did, takes away the shame of stuff not fitting right, of those feelings of shame that still sometimes come. It feels amazing to pass clothes on to other strong fat people.

Swaps are a way to play with clothes, to connect with other fat folk and joke about how shit fat sized clothes are. They've been a space to try stuff on and experiment outside of a traditional gendered shop setting - to laugh and explore and support others too. It's a way to build fatshion community outside of the BUY BUY BUY model, and that's really important right now.
Posted by K at 21:50