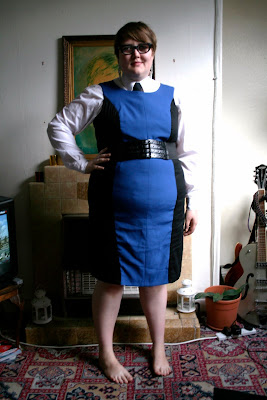 Okay, so here's some corporate wear for you. This Monday I had an interview to work at the University of Brighton digitising home movies. I still don't know if I've got it (though, to be honest, after two days of waiting I'm expecting the rejection sooner rather than later) and it would be a massive upheaval if I did. I had to catch a train at 7:00 in the morning to get there for the afternoon, so if I look grumpy, then er, there's logic behind it!

I've been wanting to try a shirt/tie combo for a while, and decided to give it a go here. Here's a breakdown:

Shirt: Boyfriend's, free to borrow
Tie: Boyfriend's (it's a 1960s policeman's tie!), also free to borrow
Shift dress; Evans, about £20 a while back I think? It was an impulse buy, but has proved to be the most versatile item I own. Seriously, shift dresses own me now.
Belt: That Dorothy Perkins belt again, £7
and not pictured - boring black flats again.

The shirt/tie thing will definitely make more appearances. I felt very dapper!
Posted by K at 22:38